I've been to Lauds. Have you?

Lauds comes from "laudate" meaning "to praise" and is a part of what are known as the canonical hours of the Christian church. More specifically, lauds are the prayers that are sung at dawn.

The Liturgy of the Hours or Divine Office is the official set of daily prayers of the Catholic Church to be recited at the canonical hours by the clergy, religious orders and laity. It comprises mainly psalms supplemented by hymns and readings, and together with the Mass, constitutes the official public prayer life of the Church. It also forms the basis of prayer within Christian monasticism.

Canonical hours, or nones, are divisions of time that serve as increments between the prescribed prayers. A Book of Hours contains such a set of prayers. Other monikers for the canonical hours include the Opus Dei (not to be confused with anything from a Dan Brown novel) and the Daily Office (Anglican Church).

In the Anglican Church, the Liturgy of the Hours is contained within the book of Daily Prayer of Common Worship and Book of Common Prayer. Indeed, because the prayers are more widespread among the laity in the Anglican Church, Anglicans are probably more familiar with the evening prayers known as Vespers than their Catholic counterparts. 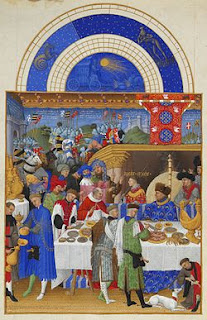 Les très riches heures du duc de Berry, 1410. Musée de Condé, Chantilly.
Commissioned by John, Duc de Berry, this medieval book of hours is the most important
illuminated manuscript of the 15th century. How can you not want to see the original
when it is kept in a place whose name in English means "whipped cream"?

Lauds: Dawn prayer at dawn or 3 am

Prime: Early morning prayer at the "first" hour, or 6 am

Terce: Mid-morning prayer at the "third" hour, or 9 am

None: Mid-afternoon prayer at the ninth hour, 3 pm

Vespers: Evening prayer at the lighting of the lamps, generally 6 pm

The practice of daily prayers grew from the Jewish practice of reciting prayers at set times of the day. It was purportedly passed down from the Apostles and as monasticism spread, the practice of specified hours and liturgical formats was standardized.

In 525, Benedict of Nursia wrote the first official Western manual for praying the hours (this is St. Benedict, founder of the Benedictine Order) as part of his Rule. The Rule of Benedict in fact became one of the most influential religious rules in Western Christendom. I think Benedict wanted to find a way to keep his monks out of trouble and on task.

The Lauds service I attended was part of the regular prayers held at Engelbrektskyrkan in Stockholm. A small gathering of clergy and laity (three priests and three lay people, myself included) met for a quarter of an hour at 7.45 to sing, or more like chant, the psalms in Swedish (disappointingly, not in Latin). I managed to croak along, despite my allergies. All in all, it was a very peaceful experience and I will definitely attend again when they start up again in the fall. You never know what cool people will turn up at Lauds.

The psalms we chanted were Psalm 130 and 107, and I was pleased to see that the concluding prayer was my favorite, the prayer of St. Bridget of Sweden:

Lord, show me the way and make me willing to follow it.