Hurray! It's Waffle Day (or Våffeldagen)

Today is the Feast of the Annunciation, which in Sweden is known as Waffle Day. This is the day when Swedes gorge themselves on delicate and crisp flower-formed waffles served with jam and whipped cream.

The Feast of the Annunciation commemorates the visit of the angel Gabriel to the Virgin Mary where he tells her that she will be the mother of Jesus (Luke 1:26-38). The feast has been celebrated in the Christian Church since about the seventh century. 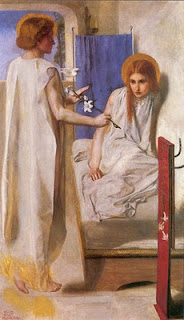 Tecce Ancilla Domini (The Annunciation) by Dante Gabriel Rosetti, 1850. Tate Gallery. Do you really think this young girl is thinking "Be it done unto me according to thy will?"

In Sweden, until 1953, Marie bebådelsedag (Annunciation), or as it was more popularly known, Vårfrudagen (Our Lady's Day), was a red day (holiday) in the Swedish calendar, just one of the numerous red days that have a religious background (such as the Feast of the Ascension, which is still a red day today).

Traditionally, it is the first festival of the spring, marking the end of winter and the return of the cranes, which were said to "bär ljus i sång" (bring light with their song) a reference to the fact that it was light enough after work and dinner to see without lighting candles, since the days were longer.

So, what does any of this have to do with waffles?

The Swedish "Vårfrudagen" has over time morphed in the mouths of the populace into Våffeldagen, and today, few people are aware of its religious roots. Most people presumably think that it is the national waffle day.

We are going to attempt to make waffles from scratch this evening, (last year's attempt was a complete fiasco). Here is this year's recipe, from ICA Kurir.

Method: Mix milk, flour, salt and baking powder. Let stand 30 min. Melt butter and add to mix. Pour into a well-greased waffle iron. Tip: put a knife on the plate from which the waffles will be served and pile the waffles on top, this will help maintain crispiness.

Some more fascinating Annunciation trivia to impress your friends:

This year marks the first year that the Feast of the Annunciation will be a public holiday in Lebanon, for both Christians and Muslims.

The Annunciation has been a very frequent subject of artistic representation, especially during the Middle Ages and the Renaissance. Some famous examples include the works of Sandro Botticelli, Leonardo de Vinci, Caravaggio, Duccio, Murillo, Donatello and Giotto (in particular, the Scrovegni Chapel in Padua). A good reason for an Annunciation road trip to Italy, I say!

There are many prayers and devotions based on the story of the Annunciation.

The Hail Mary (or Ave Maria in Latin) is a traditional Catholic prayer to the Virgin Mary. It forms the basis of the Rosary, and most of the text can be found in the Gospel of Luke.

The Angelus is a Christian devotion in memory of the incarnation (angelus is Latin of for angel, and is derived from the opening words: Angelus Domini nuntiavit Mariæ). The prayer is recited as versicle and response, and includes three biblical verses and three Hail Mary's. It was traditionally recited in Roman Catholic churches and monasteries three times a day (6:00, 12:00 and 18:00) and today is still used by some churches (including some Anglican and Lutheran churches). Traditionally, it was accompanied by the ringing of the Angelus Bell.

(I had to say the Angelus on an empty stomach every day before lunch when I attended Grade Eight at St. Patrick's Catholic School in Canada.)

Then there's the Magnificat, which is also known as the Canticle or Song of Mary, and which has been set to music by many composers. The text also comes from the Gospel of Luke, recalling the words of Mary when she visits her cousin Elizabeth at what is known as the Visitation. Elizabeth was barren, and became pregnant late in life (her son was John the Baptist, who prepared the way for Jesus by baptizing people). In the narrative, when Mary relates to her that she is also pregnant, Elizabeth's baby moves, and Elizabeth praises Mary's faith. Mary's response is the Magnificat. 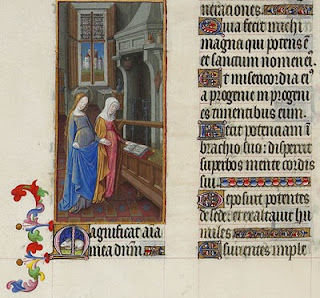