Have you ever wondered why there is a severed finger on the coat of arms of the city of Skövde? Or the identity of the woman who is holding it? Find out today as we look at the story of St. Elin of Skövde, another proof that Swedish hagiology is indeed gory. 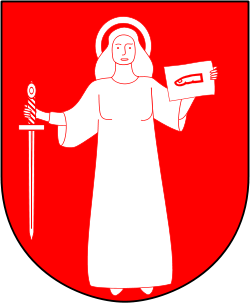 Coat of arms, City of Skövde.

St. Elin was a widow, a pilgrim and a martyr who was killed by her in-laws in Skövde, in western Sweden, in the latter part of the 1100s.

Widowed at an early age, she devoted herself to the service of the poor and the church in Skövde, which she helped to finance, and went on a pilgrimage to the Holy Land.

When she returned in about 1160, she was stabbed to death by the family of her son-in-law while walking to or from the church in Götene. They had accused her murdering her son-in-law, who, according to the legend, was beating his wife.

Then the miracles started. The most remarkable involves a blind man who was able to see again after finding Elin’s amputated finger (which was wearing a ring from the Holy Land).

St. Elin was buried in Skövde Church and a spring began to flow in conjunction with her burial, St. Elin's spring, which was said to have miraculous healing properties.

Other strange curiosities include the stone on which her body was washed that was said to have split in two as her blood ran over it. Pregnant women traditionally walked around the stones to ensure a hassle-free delivery.

Until the Reformation, St. Elin was revered in Sweden as well as in Denmark. Interestingly, at Tisvilde, there is a holy well known as St. Lena Kild, or St. Helen's Well (she was known as Sankt Leene, or Lena, in Danish and St. Helen in English. Confusing?) that drew pilgrims.

According to legend, her body washed up there in a stone coffin (though why her body would be floating begs a few questions). Traditionally, pilgrims would take home small bags of dirt from St. Elin’s grave (they wore the bags around their necks) for their healing properties.

St. Lena Kild, incidentally, was one of the three great pilgrim destinations in the Nordic countries after Nidaros and Skövde during the Middle Ages.

St. Elin's life and works are well documented: there are 38 works from the Middle Ages that mention her name, and her life was described by St. Brynolf (Bishop Brynolf Algotsson) of Skara, Sweden, in his Helenaofficium from the 1280s. He called Elin Flos Westgocie, the Rose of Västergötland.

St. Elin’s feast day is 31 July and her church, St. Helen's, still stands in Skövde. Her cult lives on in the annual Elinsmässomarknaden that has traditionally been held on her feast day in Skövde, and which will be held on 14 August this year.

St. Elin is usually portrayed as a widow with a sword and an open book upon which rests an amputated finger, as you have already seen on the coat of arms of Skövde above.