If you're up on your saints' feast days (or your John Donne), you will know that tonight (Dec 12, actually) is the Eve of St. Lucy, or Lucia, the festival of lights celebrated in Sweden on December 13.

Lucia was born in Syracuse in 300 AD and was probably a victim of the wave of persecution of Christians during the reign of the Roman emperor Diocletian. According to legend, she carried food to Christians hiding in underground tunnels, wearing a wreath of candles on her head to light the way. When a rejected suitor had her arrested, she was supposedly saved by divine intervention from a life of prostitution and then death by fire, but was eventually killed by the sword.
In the Middle Ages, St. Lucy's Day was a popular festival in many parts of Europe. Before the 16th-century Gregorian calendar reform, the feast day coincided with the winter solstice. Since December 13 was the shortest day of the year, Lucia was said to bring light and longer days.

Today, Lucia is celebrated on many different levels in Sweden, from the televised Lucia wearing candles in her hair to the thousands of Lucia processions held in daycare centers and schools around the country.

In schools, Lucia is normally marked with a morning procession led by a girl dressed as Lucia wearing a white robe and a red sash around her waist. She is followed by a train of white-gowned girls and "star boys" wearing dunce caps singing Lucia and Christmas songs. The retinue may also include various gingerbread people and gnomes. The pageant is generally followed by a spread of saffron buns, gingersnaps and coffee.

This year's Lucia celebrations have created a buzz in the Swedish media. Earlier in the week, news about a ban on gingerbread men, gingerbread cookies and gingerbread-themed songs (possibly for fear of racial connotations) at a school in Laxå spread like wildfire on social media. The school has since reversed the ban, it seems.

Lucia celebrations are quintessentially Swedish, but highly religious in nature. And the Swedish Education Act states that Swedish schools should be non-religious.

Why then, given the recent public debate about holding school closing ceremonies in churches – and celebrating Advent in schools – is no one protesting the tradition of sending children to school dressed as Catholic martyrs? 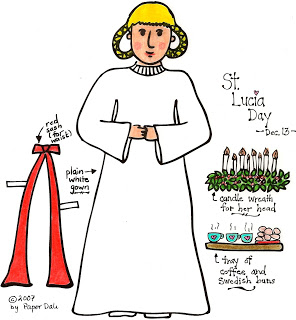 December 6 marks the death of Nicholas of Myra (now the Anatolia region of modern Turkey) who died on this day in 346. He was a Greek Christian Bishop known for miracles and giving gifts secretly, and is now the patron saint of children, sailors, harbors, merchants and students. He is the saint behind a number of traditions associated with Christmas and gift-giving, and is also known for his oozing relics in Bari.

Miracles back in the day

In his most famous exploit, St. Nicholas aided a poor man who had three daughters but could not afford a proper dowry for them. According to the legend, Nicholas heard of the man's plight and threw three purses (one for each daughter) filled with gold coins through the window of the man's house by night. In some versions, he throws one bag per night or one bag every few years as the girls come of age. Another twist has him dropping the bag down the chimney – indeed, in one variant, the bag of gold falls into a stocking one of the daughters had hung to dry over the embers.

In another miracle, Saint Nicholas resurrected three boys murdered by a malicious butcher who intended to cure and sell them as ham.

In 1087, half of the relics of St. Nicholas were translated from Myra to Bari in southeastern Italy (the rest ended up in Venice). For this reason, St. Nicholas is also known as Nicholas of Bari.

The relics and certain icons of the saint are famous for exuding a clear watery liquid called myrrh (not to be confused with proper myrrh) which is said to smell like rose water and to possess miraculous powers. This liquid has been collected – and ostensibly sold – for centuries and can still be obtained from the shop at the Basilica di San Nicola. A search on eBay yielded nothing, alas.

Because of its "miraculous" relics, the Basilica di San Nicola has traditionally been a site of Christian pilgrimage and continues to be to this day. Indeed, modern people travel to Bari to witness the myrhh-streaming icon of St. Nicholas, as evident in the account given by pilgrims from St. Vladimir's Russian Orthodox Church in Edmonton, Alberta on a trip to Bari in 2012:

"The first part of our first day’s visit was spent talking with Father Elias who told us accounts of miracles and spiritual blessings given by the icon… He then took the icon out of its cloth covering and wooden kivot and held it up. We could see more plainly the myrrh lightly flowing from the icon. The icon’s surface was “shiny wet” and the cotton batting placed below it was already half-soaked with myrrh."

Saint in a Santa suit

In Roman Catholic iconography, Saint Nicholas is depicted as a bishop wearing a red bishop's cloak and a red mitre and holding a bishop's crozier. In the Eastern Orthodox Church he looks like an Orthodox bishop, wearing the omophorion, holding a Gospel book and sometimes wearing a mitre. In fact, he's easy to spot because he looks like a fitter version of the modern Santa Claus.
The episode with the three dowries is commemorated by showing him holding in his hand either three purses, three coins or three balls of gold. Depending on whether he is depicted as patron saint of children or sailors, his images are completed by a background showing ships, children or three figures climbing out of a wooden barrel (recalling three slaughtered children he resurrected in one miracle).

The modern St. Nicholas is bearded, dresses like a bishop in red and white and usually carries a sack over his back. 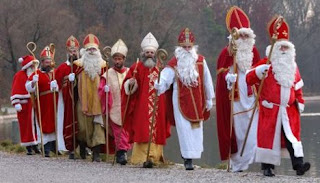 A rather merry group, wouldn't you say?

On December 6, children in Germany, Austria, Switzerland and Holland celebrate Nikolaus – or Sinterklaas in Holland  – by leaving one shoe outside for St. Nicholas to fill with treats like coins, chocolate, oranges and toys. Earlier, naughty children would receive a switch, ostensibly for spankings, and St. Nicholas was known to have a sinister-looking alter-ego named Knecht Ruprecht who would accompany a person disguised as St.Nicholas to reprimand the naughty child.

In these countries, St. Nicholas does not return at Christmas: instead it is the Weihnachtsmann or Father Christmas, who comes to German homes – often in person – on the afternoon of Christmas Eve.

The modern Santa Claus who brings presents for children on Christmas Day is derived in part from the Dutch Sinterklaas and retains many of the attributes of the original St. Nicholas.