A few weeks ago, I spent an exhausting day trying to keep up with an enthusiastic group of cyclists at a Livestrong Day cycling event in Strängnäs, Sweden.

Not only did I arrive without a decent map, but also without knowing if any saints were associated with the diocese city of Strängnäs. Bad preparation for an aspiring hagiologist like myself.

I now know that the saint related to Strängnäs is St. Eskil. Here is his story, along with some other compelling reasons to visit this friendly Swedish town.

Eskil was an 11th century English monk who was sent to be a missionary among a "wild and raw" Viking population by St. Sigfrid of Växjö. He established his operations in Tuna, near Lake Mälaren in Sweden, where he later become bishop.

According to legend, St. Eskil travelled from Tuna to nearby Strängnäs, which at the time was dominated by pagan (Asa) worship. When he arrived, he disrupted a holy ritual by bringing on a hailstorm that destroyed the pagan altar.

Enraged, the congregation axed and stoned Eskil to death on the hill where the Strängnäs Cathedral (from 1291) now stands. The death blow, by the way, was said to have been delivered by an infidel named Blot-Sven, King of Sweden from 1084 to 1087 who overthrew his brother-in-law, Inge the Elder (Inger Stenkilsson).

No Swedish saint's saga would be complete without a holy spring, and St. Eskil is no exception.

His followers carried his body back to Tuna, and according to local tradition, a miraculous spring gushed from where they put the body down, just outside of Strängnäs. Indeed, today as you drive or cycle out of Strängnäs, you can stop to see the trickle at St. Eskil's Spring.

St. Eskil was buried at his monastery in Tuna, and his relics are now kept at Strängnäs Cathedral as well as in churches in Copenhagen and Roskilde, Denmark. There is also an arm bone kept in a reliquary at the Museum of History in Stockholm.

Strängnäs was later converted to Christianity, and the diocese St. Eskil had created in Tuna was moved there. Tuna later became known as Eskilstuna, a nice bit of knowledge that you can now use to impress your friends.

St. Eskil's feast day is 12 June. He is usually depicted in episcopal attire, carrying three stones, as in the fresco below from Överselö Church in Sweden. Along with St. Botvid (namesake of Botkyrka) he has been the patron saint of the Province of Södermanland, Sweden, since the Middle Ages.

Today, Strängäs is a charming town situated on the shore of Lake Mälaren that is definitely worth a visit, not least because it boasts Gyllenhjelmsgatan, purportedly the prettiest street in Sweden.

Strängnäs also has probably the friendliest cycling club in Sweden, as well as some restaurants worthy of mention.

We ate some lovely Greek food at Grekiska Taverna following our 53 km ride. Then there's Edsbacka Bistro Strängnäs, sister to Edsbacka Bistro in Sollentuna, where Christer Lingström of Edsbacka Krog fame is still dishing it up. We were also told that Hotel Rogge is the place to kick back with drinks on a Friday afternoon. Another reason to go back.

LIVESTRONG Day is an annual event held on October 2, the day on which its founder, cyclist Lance Armstrong, was diagnosed with testicular cancer. He survived and went on to win the Tour de France, not once, but seven times in a row. Today, he is probably the world's most well-known advocate for cancer survivors. 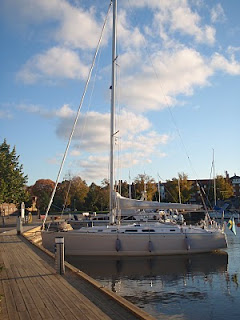 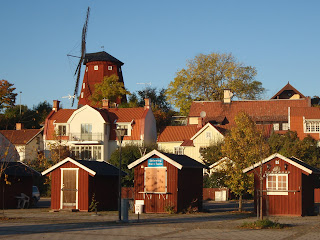 Windmill and quaint Swedish houses in the autumn sun.